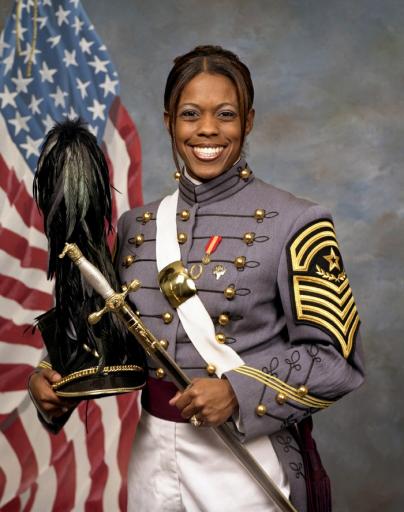 Second Lt. Emily Jazmin Tatum Perez, 23, was killed Sept. 12, 2006, when her Humvee was struck by an improvised explosive device as she was leading a convoy through Al Kifl, Iraq. She served in the 204th Support Battalion, 2nd Brigade, 4th Infantry Division of the U.S. Army.
Perez graduated from the U.S. Military Academy in 2005. She was an exemplary student and became the highest-ranking African-American female cadet in the history of West Point. An exceptional athlete, Perez was a sprinter on the track team (200 m) and competed in the triple jump. She also excelled at gymnastics and squats. Her favorite movements included sprinting, double-unders, pull-ups, squats and power cleans.
Perez earned numerous awards for her military service, including the Bronze Star, Purple Heart, Army Commendation Medal, National Defense Service Medal, Iraq Campaign Medal, Global War on Terrorism Service Medal, Army Service Ribbon, Overseas Service Ribbon, and the Combat Action Badge. She was also posthumously awarded the NCAA Award of Valor in 2008.
Perez was the first female African-American officer in U.S. military history to die in combat and the first female West Point graduate to die in the Iraq War. She is survived by her parents, Daniel and Vicki; brother, Kevyn; and many classmates and friends.
Posted by Adam at 9:00 PM No comments:

In teams of three, complete the following for time:
1200 Meter Relay Shuttle Run
120 Double-unders
90 Alternating One Arm KB Cleans(70/55)
60 Box Step-Overs with Dumbbells (50/35 lb DBs)
90 Alternating One Arm KB Cleans(70/55)
120 Double-unders
1200 Meter Relay Shuttle Run
Only one member of the team may be working at a time, and no member may begin the next movement until the team has completed the preceding. Tasks may be partitioned as you see fit.

Strength:
Power Clean (touch and go)
5 reps @65%  70%, 75%, 80%, 85%
WOD:
Tabata Something Else
Tabata pull-ups
Tabata push-ups
Tabata sit-ups
Tabata squats
The Tabata interval is 20 seconds of work followed by 10 seconds of rest for 8 intervals. There is no rest between exercises.

The gym will be closed Monday for Labor Day. There will be a Monday WOD posted for you to do on your own.

Olympic Lifting. Make up a missed WOD. Mobility. Work on gymnastics skills
Posted by Adam at 9:00 PM No comments: